We've had Alice 8 months now! I can't believe it's been that long already. She's doing so well and she's finally starting to feel like a member of our family and not a foster dog. I've felt like the last 3 years I worked at the dog training facility was all in preparation to own Alice. The minor behavioral problems that we've had have been easily worked out and most of the time I've immediately known what to do if she does something unexpected. Even though I'm no longer at that job, I still highly value all the knowledge and practice I got there. I'm thankful to my mentors for everything they taught me. Alice would not be a successful member of our family if I hadn't had all that training.

When Alice came home, she was always in a high arousal state. She was way too excited about absolutely everything, which lead to some barking and lunging at dogs on leash, she was also extremely intense about the environment and all the creatures around us. She would not take anything but the highest value food (cooked meats), which made training a little challenging at first. It was hard to know which reinforcement would work and which wouldn't so it took some experimenting. We've gotten to the point where in our neighborhood, I can use lower value treats but when I take her on a hike or any other trip, I'm still pulling out the highest value stuff for her. She's not being counter conditioned and fed constantly anymore but I like having the best treats on me for when I need them. 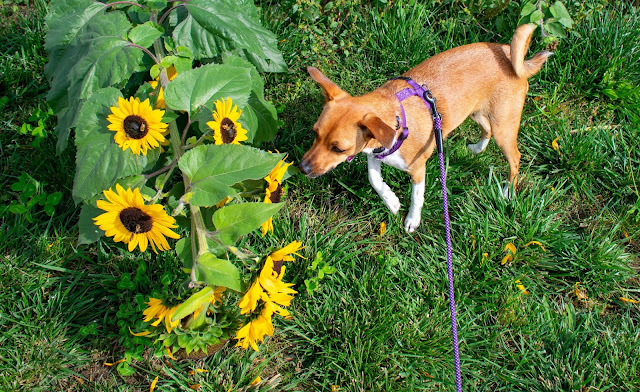 I was really worried about Alice for a few months because the last thing I wanted to do was have another reactive dog. I'm happy to report that with some diligent training, counter conditioning her to dogs and the environment and training of alternative behaviors, we have not seen any reactive behavior in a good long while. She does still fixate on squirrels here or there and I have seen a bit of neophobia (it was dark and someone left an unexpected bag of trash in a weird spot, she couldn't tell what it was so she barked) but she's easily redirected. I've noticed that she has started trusting me and my judgement about stuff. She's really good about all our regular neighborhood dogs, even the ones that bark their fool heads off at us. She can still get a little tense if she smells a new dog but she takes direction well and looks to me for what to do and falls right into the training we've been doing. It's taken a little extra work on my part but she's coming along so nicely.

We've also had a major break through with her potty training. I was extremely and I mean EXTREMELY frustrated with her with the potty training. Alice is the first dog that I've ever known who would not go potty unless it was absolutely urgent for her to do so and it was hard to tell when she had to go. We had more accidents in the house that I've ever had with any dog previously. Even with crating her and watching her and trying to get her on a schedule, it was tough. I ended up desperately asking for advice on a +R facebook training group and I was given advice to up her fluid intake. For about a month, instead of doing training for meals, I would soak her meals in water. I also gave her water mixed with (low sodium) chicken broth about two hours before bedtime, so we could get a quick pee in right before bedtime. With all the extra fluids going in, we finally made progress and I was able to put a cue on her peeing. Occasionally she will go outside and be so distracted she won't go but it's gotten so much better. We are still walking her to get her to poop but with a few spoonfuls of canned pumpkin at dinner time, she's gotten more predictable and regular with that, too. She has started to alert us to when she needs to go outside now, which is great. 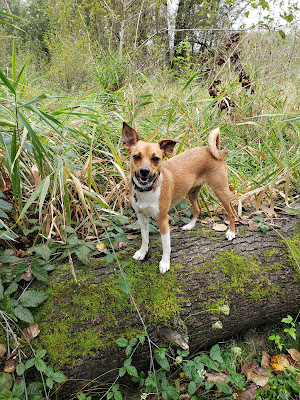 In the past couple of weeks I've even started to trust Alice a bit off leash and we've done a few hikes at the park I know best (where off leash is legal). If you're following along on my instagram (@zoepheedogs) you can see some of her beautiful recalls. When I got her I was worried I'd never be able to take the leash off because she'd either take off after a critter or go home with someone else because she's so friendly. She has greeted people on our hikes but has always come to find me right after. It appears that she knows who her family is now and she's choosing me.

With the hikes we've done and the dogs Alice has met, I'm still on the fence with how she feels about interacting with other dogs. I would generally say she doesn't really like dogs she doesn't know well. She greets well and is cool if the other dog is cool. I've never seen her really play with a dog she just met. She's not very trusting. I've also seen her get snarky if another dog won't leave her be. We had to save her recently from an adolescent cattle dog puppy, who wouldn't take no for an answer. That puppy was twice her size and was bullying her and it caused an aggressive response from Alice because he wouldn't stop. The thing is, Alice is definitely a terrier, she's got BIG feelings about things and if she doesn't like something, she won't put up with it. So with that knowledge, I'm being super careful with her dog/dog interactions. 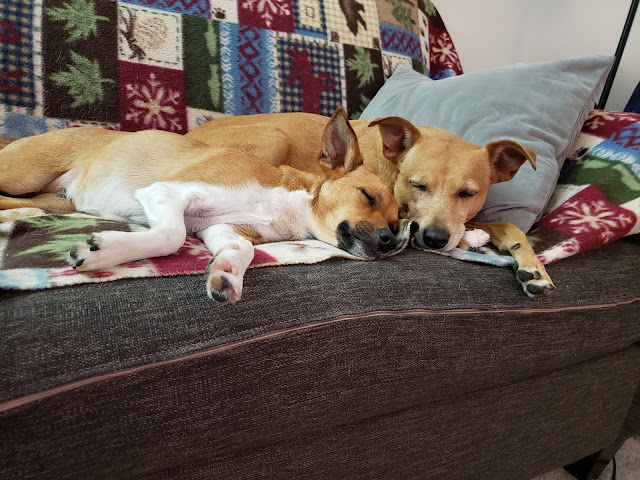 Alice is doing really well with Phoenix and Zoe. Phoenix is still her favorite buddy and she beats Phee up regularly. They have a good time crashing around the house. She still has some trust issues with Zoe. Zoe is definitely that old lady dog who would scream "GET OFF MY LAWN" if she could. We're still working on building a trusting relationship with the two of them. Zoe can be snarky at times but I trust her way more than I did when Alice first came home. Most of snarky behavior we've seen was because Alice was too high in arousal and it bothered Zoe. So we're constantly working to make sure the chaos doesn't last too long, or Zoe is in another area of the house when they're being crazy. 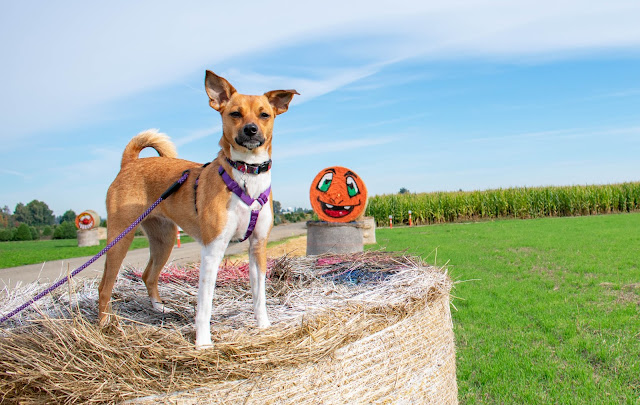 We recently took Alice on a solo adventure to Bauman's Pumpkin Patch and hiking at Silver Falls State Park. (Silver Falls is a gorgeous park but not very dog friendly. Dogs are not allowed on any of the trails to the waterfalls, which was a huge bummer) She did absolutely amazing. At both places, there were people, kids and dogs everywhere. She posed for photo after photo. She did everything we asked her to do and was completely fearless. She was the perfect traveling companion and all the people she met loved her.

We still have some things to work on. Alice is still scavenging things she finds on walks. It's been a real problem and she has gotten sick from eating acorns. We've been working really hard on "drop" and "leave it". She's pretty darn sneaky with things she finds on walks. A few times I've had to open her mouth and remove objects. The joy of a former street dog! LOL!

She's also having a tough time leaving the cats and their food alone. Cats are super fun to chase and only one of our cats will correct her. The other cat acts like a prey animal. We've been doing some timeouts for cat chasing and we've had to up our management and rearrange the area where they are fed. Alice was climbing the cat trees! I think we've finally got that worked out. 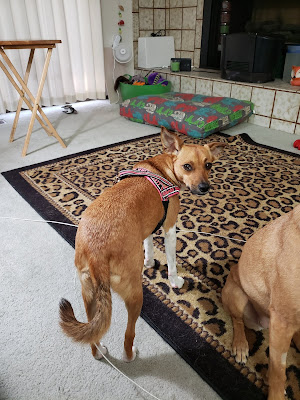 I am also super aware she's a bit chunkier than I would prefer. We've been doing so much training that she has gained a little weight. I'm very careful with her food intake but with her sneaking cat food and eating nuts off the ground and all the training, it's been tough to keep her slim. I think we're about to the point where I can start reducing my rate of food reinforcement and we're working on adding toys as the reinforcement. She loves running on the treadmill and going for hikes so hopefully we can get about a pound off of her soon. 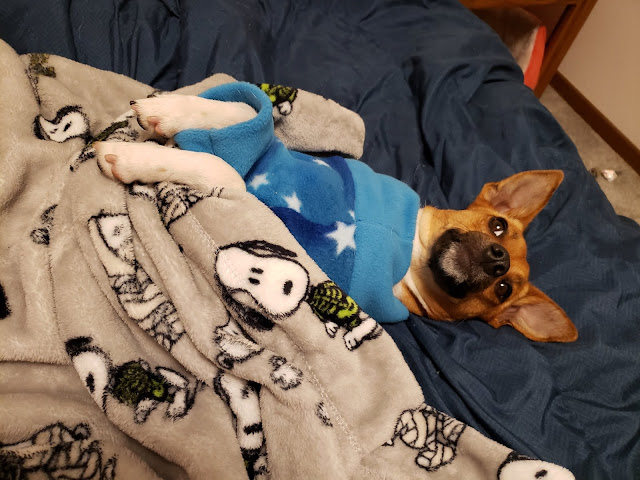 Alice has been sleeping with me at night and she has been so loving. She's such a sweet dog and has been comforting to me in a way that the other dogs aren't able to. Zoe has always been aloof and Phoenix, while she's my heart dog, she's not into being cuddled. I think Phoenix is finally relieved to have another dog in the house, so she's not constantly being kissed. LOL! Alice absolutely soaks up the attention and wants to be held and petted. I've been really struggling with depression this year and have been having a very hard time. Alice is down for cuddles, she's down for laying in bed if I need her to. She's also ready and willing to go on any adventure I throw at her. She's gotten me out of the house, she's gotten me socializing with people I would of never spoken to. She's so friendly and such a social butterfly that I've just gone with her on her adventures. She reminds me to get up and get outside, she reminds me to get up and get off the computer. It's time to GO! Even though Alice didn't come at the perfect time in our lives, we weren't financially prepared for a third dog with me being unemployed, I'm happy she's here. It's becoming really hard to imagine what life was like before she brought her optimistic, chaotic craziness into our lives. We really love her!

I'll be posting her photos from Silver Falls in a separate post, as I'm reviewing the coat she wore. :)
Posted by zoepheedogs at 1:34 PM