The Girl and the Wasp - Shutting Dogs Down

Once upon a time there was a young girl who was terrified of wasps. You see, her parents used to compete in gardening events and they took her along to all of them. In the summer, this girl has been chased and bitten by wasps, for just playing in the gardens. Over time, she developed an extreme phobia of flying stinging insects.

One year she met her new family and they are very loving people but they don't really understand this girl very well. She's a weird one. She connects with animals better than people and would rather spend hours reading than interacting. You could say she has always had her head in the clouds, dreaming. Her family? They love her but that doesn't mean they get her. The girl's new family loved to have picnics and dinners outside on their patio. Every summer the wasps would come and the girl, she would run for the house, often vocalizing her fear loudly. "GO AWAY, you nasty stinging insects!!!" she would scream. She would scream and sometimes swat at these horrible stinging insects and try to get them away from her. Often times she would resort to having to eat inside the house, with the window open so she could still be with her family.

What did her family do about this? Well, her family thought her behavior was pretty annoying. They wanted to have nice, quiet dinners with polite conversation. They would complain loudly at her and shame her for being afraid. Often times they would tell her that she was "just doing it for attention". They would tell her she was being ridiculous and to come back outside and every time the girl would give in to her fear, the wasps would come. Her family did try some wasp traps but they were never enough, there were always too many.

The girl was VERY embarrassed by her phobia. She hated that these flying insects would make her scream and act out. She was shamed by her family and she was SO ashamed of herself. Often she would wonder why she couldn't just sit outside and enjoy a meal with everyone without being terrified. Eventually the girl was shamed so badly that she would sit outside with her family and when the wasps came she was still terrified of them but she sat in silence, often screaming inside her head, absolutely afraid to move or vocalize her discomfort because it was always met with ridicule. It's not polite in our society to scream and dance around in fear. She was still terrified of the wasps but her family had effectively shut her down. So there she would sit, silently terrified, wishing the flying stinging things would all die and leave her alone. 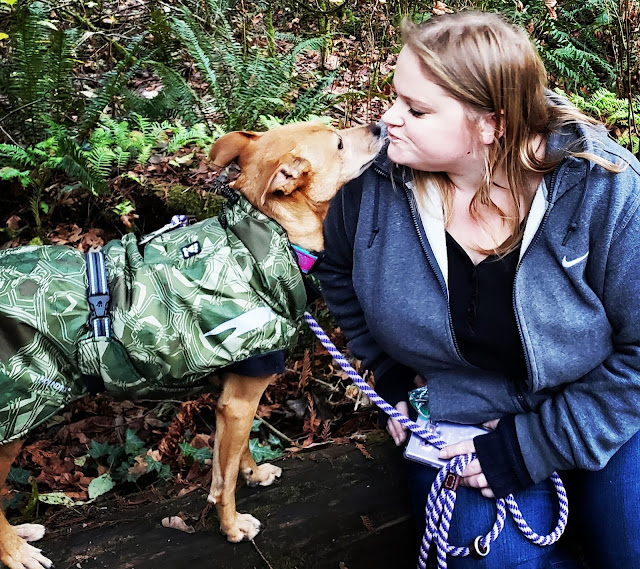 What does the girl and the wasp have to do with dog training? Well funny you should ask. Every single time a person "corrects" their dog when they display behavior out of fear or anxiety, they are only shutting that dog down. They are stopping behavior without addressing the underlying emotions. You have stopped the dog from moving or vocalizing but they are still screaming silently in their heads, just like the girl and her wasps.

When dogs are anxious in their crates and make noise and their person whacks the crate to shut them up, they might shut up but they are still anxious. Just because you've stopped the dog from vocalizing does not mean you have fixed the anxiety, you've likely made it worse. When you squirt your dog with water or jerk the leash for reacting at another dog, you may have stopped the reaction but you have not made the dog feel better, you've likely just associated your dog's trigger with more fear and pain. The dog learns that they can't trust their owner. Their owner gets mean when their trigger is present. Often times we see reactivity get worse and worse and the owners keep having to escalate the punishment to get the dog to "stop".

We need to remember that our dogs did not ask to be a part of our family. We went out and chose our dogs and we owe it to them to be loving humans worthy of their trust. We owe it to them to use kind, humane training methods. When your dog displays unwanted behavior, you have to figure out what the underlying cause of that behavior is and you have to address the emotions behind it and if you can't figure it out on your own, you owe it to your dog to find a trainer who uses humane methods to assist you.

The girl might have eventually learned to live with the wasps, she might have been able to get over her fear had she been supported through her phobia. She was not and she is still terrified of flying/stinging insects. The girl loves her family dearly but she doesn't visit them as often as she should and she avoids any activity with them that requires eating outside. Everyone has lost in this one. The girl does not blame her family for not understanding her or behavior. It just is what it is. The girl does her very best to never use aversive punishment on her dogs or shut them down because they are scared and displaying unwanted behavior. The girl continues her education and tries her best to be worthy of her dogs and to pay it forward.