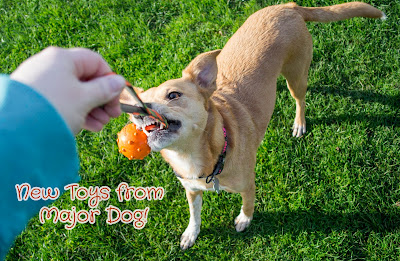 Happy Fit Dog Friday, everyone! Today I have a review for you on some new toys from Major Dog! We've reviewed a toy from them in the past and you can find that here: Major Dog Tiger Toy!

Major Dog is a great company that is based in Germany, the toy capitol of the world. They are the only dog toy company to my knowledge that put their dog toys  through the same rigorous testing as the toys made for children. Quality and safety is extremely important to Major Dog and because of that all of the toys are TÜV-certified. The toys are awesome and they help to keep our fitness routine fun and interesting! The dogs have been loving them! Even Zoe who isn't all that into toys has been playing with them! We got our toys in exchange for an honest review. 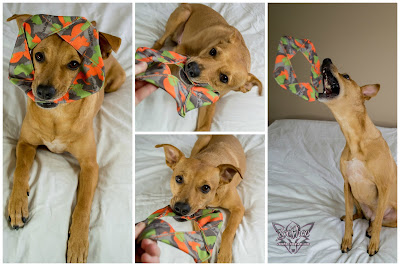 If you've seen some of our posts in the last few weeks, Phoenix has gotten really into playing frisbee! She's learning a lot of disc dog ticks and she loves it! I love disc dog stuff my dogs are getting a great workout and having a ton of fun. The only problem we've been having is that Phoenix is afraid of hard discs.The Flying Felix toy is a great solution to this. It's a soft disc-like toy that's made from a sturdy canvas material. It's super easy for the dog to catch and it makes learning disc tricks so easy for Phoenix. This toy comes with one small squeaker and I can't even begin to describe to you how much Phoenix loves it! This toy is not only awesome for playing frisbee but it's also great for playing tug! It's one tough toy and we've been playing with it nonstop since we got it! Another great feature of this toy is that you can fold it and it easily fits into my pocket. So I can quickly whip it out for rewarding Phoenix in training sessions as well. I love how versatile this toy really is!

As you can see, Phoenix really loves the Flying Felix and we've been having so much fun with it! 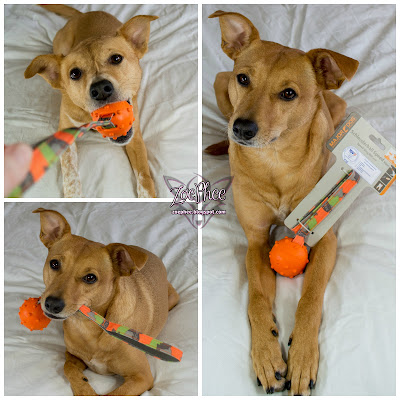 The Speed Sling Ball is the other toy we received from Major Dog. This is an awesome fetch style toy that was designed with special rubber to be easy on your dog's teeth. The ball has a canvas loop attached to it, making this toy easy to throw. It's also great for playing tug. The Speed Sling Ball comes in two sizes: small or large. This toy would be great for any ball obsessed dog and any dog who loves playing tug. Both of my dogs have been having a fantastic time playing with the small Speed Sling Ball. I use playing fetch as my warm up to doing disc tricks and they have both enjoyed chasing after this toy. The handle is made from the same sturdy material as the Flying Felix and it's really held up to all of our games! I like that it's easy on their teeth and how durable and sturdy it is. The Speed Sling Ball is rapidly becoming Zoe's favorite toy which is awesome because she's not that into toys!

Zoe and Phoenix have been having a fantastic time playing with their new toys from Major Dog and I love that they are thoroughly tested for safety. Many of the toys in the Major Dog line are tough toys and my dogs have not been able to destroy any of them. I also love that these awesome toys make exercise fun and interesting for my dogs! Phoenix has been having a great time learning her disc tricks and Zoe has been really enjoying fetching the Speed Sling Ball. Both of these toys are rapidly becoming their most favorite toys and the ones I also whip out to reward them for in training, too! Major Dog has a great selection of toys for even the pickiest pooch and I would highly recommend checking them out!

We received our dog toys from Major Dog in exchange for an honest review and we were not monetarily compensated. All opinions are my own.
Major Dog is not responsible for the content of this blog post.