The Problem With High Drive Dogs, Hypothermia Scare with Phoenix!


Do you remember your parents telling you "if your friends jumped off a bridge, would you?" We learned that lesson on Saint Patrick's Day when we had a mild hypothermia scare with Phoenix. All the other dogs were swimming, having a good time and were fine...

The weather was finally sunny, my husband had the day off and we decided to go hiking out at our favorite park. The day started off pretty normal, except that everyone had the same idea we did. The parking lot was full and there was no parking. That was okay, though because there's another park about half a mile away with extra parking so we decided we'd park there and hike in. On our way into the park, we found a little off shoot trail and spent about an hour wandering around on some trails that bordered our favorite park. These sorts of trails are hardly ever used, some of them were flooded and we didn't see anyone or any dogs. When we finally made it into the park it was very, very crowded but we decided to continue on and use it as a training opportunity. Zoe had been getting frustrated with the lack of friendly dogs at our apartment complex and she really wanted to socialize. I had my husband take her down to the river to visit with the dogs while I played some counter conditioning games off to the side with Phoenix on leash. 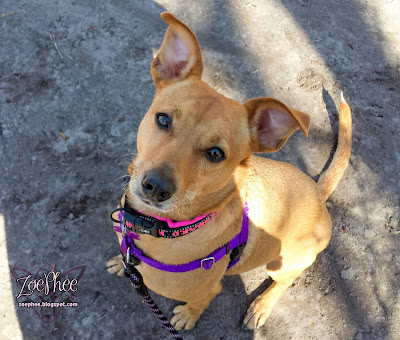 Phee was doing really well, so I asked for more and moved her closer to the action. We had several very nice greetings with other dogs and it this point I decided we should end on a good note and continue hiking. Once we were away from the big group of dogs, I went ahead and let Phoenix back off leash. We came across several more dogs on the trails but she did great practicing avoidance behaviors, which I prefer over greetings. She definitely tries not to have conflict with other dogs and I'm pretty happy about that. She does great with dogs who are calm and we ran into a bunch who were perfect for her to visit with. I'm finding out that both of my dogs really likes pit bull type dogs. I wish they weren't such breedests but I'll take it. 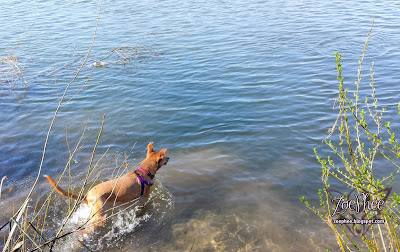 The day was going pretty well and my husband happened to pick up a stick. As soon as Phoenix saw the stick she was immediately "in drive" and wanted to play fetch. She loves to fetch sticks out of water more than anything else. Everyone out there had their dogs playing in the water so we didn't really think about it too much. We were cautious, not throwing the sticks too far and making her take breaks in between fetching so she didn't get too cold. I told my husband to give her one more throw and then we needed to leave and I was thinking he'd just sort of drop it in the water for her... Well... I learned that I need to give better instructions because he really chucked it out there and she ended up loosing it to the current. This is the problem with high drive dogs, they will do the thing they love until they literally die if people are not careful and Phoenix is no different. She searched and searched for that stick. I told my husband to quickly throw her another one because we needed to get her out. He threw a stick right to her, she grabbed it and swam back to us. 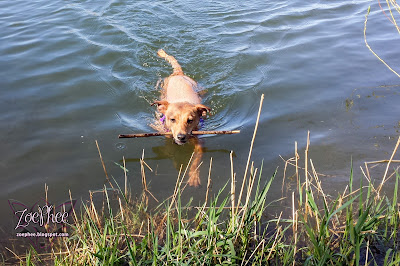 When she came out of the water, she was frozen solid. She was limping on all four legs and was so cold she could barely move and she was screaming and freaked out. It was pretty bad and probably the scariest moment I've ever had as a dog mom. I immediate picked her up and hugged her to my chest trying to warm her up. My husband told me to wrap her in my sweatshirt and that's what we ended up doing. We wrapped her up and hugged her until she was warm, taking turns carrying her. We got her over the sun-warmed sand and set her down and started toweling her off with my sweatshirt and rubbing her to warm her up. As soon as we did that and she was more warm, she took off to play with Zoe like nothing had happened and we both let out a sigh of relief. She was okay.

She was able to run around and hike back out of the park on her own, although I kept calling her back and checking to make sure her gums were still pink and that she was okay and warm enough. We are very lucky that she listens to us and we were able to get her out of the water when we did.

We learned that just because everyone else is swimming their dogs doesn't mean we should and if I do swim her she needs short throws and long breaks between them. I also need to buy her a life jacket. I'm not sure I will put her back into the water until summer, though. This was way too scary and I do not want to repeat it. Lesson learned. Just because the weather is warmer and sunny, doesn't mean that the water is warm. I was so relieved that she was okay. She came home and was playful and happy, her usual self. Thank goodness.

Has your dog ever scared you before?