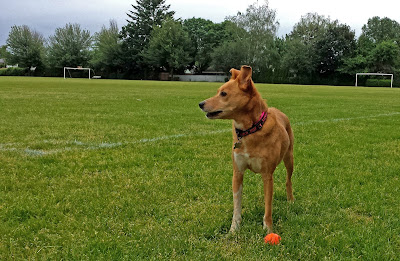 Saturdays are hard. On Saturdays we have to get up at 5:30am to take my husband to work so I can have the car. Both dogs hate getting up early and I'm right there with them. Most of the time I can barely get Phoenix out of bed.

We recently changed routines as well. The past couple of weeks, I had been taking the girls hiking but they've been eating too much grass and becoming sick. They were also getting really stressed out there to then have to go and be at my work.

So this past Saturday, I decided to try playing fetch with them at the school that's near our apartment after dropping my husband off. It worked out pretty well until somebody (**cough** Zoe **cough** **cough**) saw the squirrels running around.


Zoe dropped the ball and took off after the squirrels. Luckily the whole place is thoroughly fenced.

Structured "training" fetch or squirrels? It was an easy choice for her. On the bright side, Phoenix did not take off with her and she held her stay. After treeing the squirrels, Zoe came when she was called. I rewarded her for coming and promptly tied her up to the bench.

I was able to move further away from the trees and Zoe did have some successful retrieves even though the squirrels were still really distracting. After we played fetch I released them back to the squirrels and let them be dogs for a while. Then we went back to playing fetch. Before we left the school we did a short training session practicing recalls.

The school yard seemed to work out way better than going to the big park for hiking! I'm pretty happy with how everything went, despite Zoe taking off. It was so early in the morning that we had the whole place to ourselves so it didn't really matter if Zoe was a little naughty. The dogs were so much less stressed at my work, too.

Happy Monday Mischief everyone! What's everyone been up to?