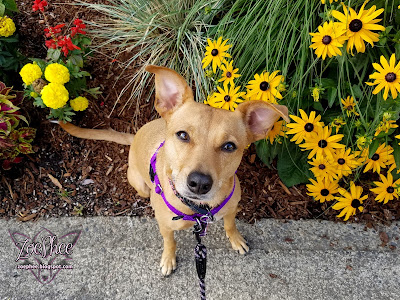 Hi everyone! Long time, no talk! I know it's been a while and for that I apologize. I sort of ran out of words and have had some other things going on that have really kept me from blogging. The girls have been great and we have been doing some "unconventional training" which is also the theme for this months Positive Pet Training Blog hop!

With the launch of Pokemon Go, a lot of people have been playing it and we are no different. The original games were my favorite video games growing up and it's been so much fun for both myself and my husband to get back into it. If you have not heard about Pokemon Go, it's a game on smart phones that has people out walking and looking for Pokemon, basically "pocket monsters". This game is very similar to geocaching! As you walk along, a Pokemon will pop up and you're supposed to catch it with Pokeballs. There are Pokestops that are on landmarks all around the neighborhood where you get Pokeballs and other things like Eggs which you have to walk a certain amount of distance to hatch. Then there are the gym battles, which are super fun too. I actually became a gym leader and held a gym overnight before another team took it over.

What does Pokemon Go have to do with dog training, you ask? I'll get to it, I promise. 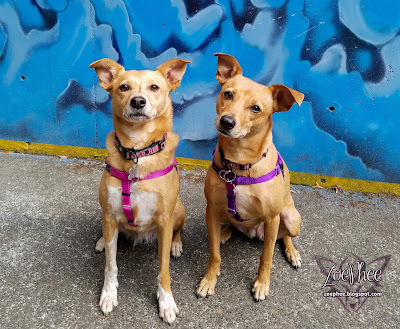 There are so many benefits to playing Pokemon Go and one of the major ones is that we are getting out more as a family and to different places! Since we started playing the game, my husband has joined us on every single evening dog walk. He's even been walking the girls on his own when I'm at work. The dogs love their dad so it's been awesome that this game has motivated him to walk them more. Zoe and Phoenix are getting more walks and longer ones. We've had so much fun exploring our neighborhood and it's nice to have my husband with us. Not only are the dogs getting more walks, they are also getting more training and more socialization.

Those of you who have been following me for a while probably know that I don't like training loose leash walking, it's tedious and can get boring. Playing Pokemon Go has motivated me to work on it more and has made it a lot easier for me do it. Even my husband has been willing to help out! He has been walking Zoe and following my loose leash walking rules. We are wandering around looking for Pokemon and looking at the cool landmarks the game has and I'm not focused on "just getting the walk over with" or "hurrying from point A to point B". I generally use the "be a tree" method and "turn around method" for leash walking. Playing this game has helped me because I'm not focused on how annoying and tedious it is to stop every single time someone puts tension on the leash, we are taking our time. I'm finding that I'm not as aggravated and I actually do want to work on leash training. Both of my dogs are doing awesome and their leash skills have greatly improved in the past two weeks.

Phoenix has made some new human friends and it's been awesome to take her out because people are more focused on playing the game than staring at her and it's not intimidating for her. She's even allowed a few people to pet her and she's happy to greet anyone who wants to say hi. She even met a nice lady who was driving a motorized wheel chair. We have also come across a few dogs and it's given me a huge opportunity to work on counter conditioning and practicing our escape training. 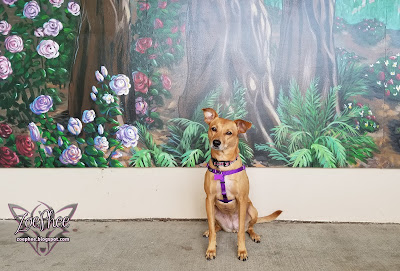 We've been working on a lot of "stays" and impulse control while we're out playing the game. I love posing the girls with all the interesting things we've found and taking their photos. One way I've incorporated stays is that when a pokemon pops up, the girls are asked to sit while I catch it. Any time we stop we ask them to sit and wait. When we go to battle a gym, we have the dogs do down stays. Zoe is the worst at waiting and she's pretty impatient so this sort of game is really helpful and it's been fun coming up with a training plan for her that utilizes the game.

I've also used the game to work on separation training because Phoenix does not like it when she's separated from Zoe. So I will often have my husband wander off a ways with Zoe while I work with Phoenix. Short periods of separation have really helped her to become more relaxed when Zoe does leave. Then when Zoe is on her way back to us, I work on keeping Phoenix calm and focused on me. It's really helped her to feel better about Zoe going off and she's getting impulse control training when Zoe comes back.

We've been having a lot of fun, Pokemon Go has gotten the whole family out together. I think it's a really awesome game to play and it's super easy to incorporate dog training in while I play. The dogs have really been enjoying their extra walks and attention. I've even heard stories about how animal shelters are taking advantage of the game and people are volunteering more to walk dogs for them. I've also heard stories about how people playing Pokemon Go were able to rescue some abandoned animals. I know there are also some stories out there of people being really dumb but I think that's going to happen with anything. If your dog is fairly decent on leash and doesn't bark and lunge at things, I think Pokemon Go is a great game to play on walks and it's very easy to incorporate dog training into it while you play.

Are you playing Pokemon Go? What team are you on? I'm on team Mystic and my husband is on Team Valor! 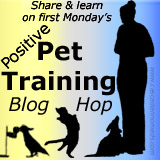 Today we are joining with Cascadian Nomads, Tenacious Little Terrier and Rubicon Days in sharing positive pet training stories, encouragement, challenges and triumphs. The hop is open all week long beginning the first Monday of each month. Be sure to stop by all the other blogs to see what they've been up to this month!

This post is not sponsored by Pokemon Go and I'm definitely not being compensated to talk about the game. All opinions are my own!