A Change in Perspective (There's Nothing Wrong with Phoenix) 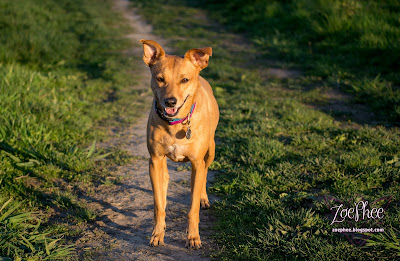 For years I've called Phoenix "my reactive dog", "my challenging dog", "my fearful one", "Zoe's evil twin" and basically insert any other words here that mean "difficult". It's true that Phoenix has been a little more challenging than Zoe because of where she came from and because she experienced trauma. However, after working at my work for a couple of months and having a lot of conversations with the awesome trainers I work with, I've begun to have a massive change in perception about my dog. There is literally nothing wrong with Phoenix. There, I said it. There's nothing wrong with her.

Phoenix can be nervous of other dogs and she would rather large dogs not be in her personal space bubble. She's basically an introvert who loves and trusts her immediate family and friends. Phoenix is a normal dog. Not liking other dogs, that she doesn't know, in her personal space is not abnormal. Her level and intensity of reaction to having a strange dog in her space is also completely normal.

I am nervous of strangers and I don't like them in my personal space. If a strange person ran up to me and threw their arms around me, I'd probably snap at them, too. Just like humans, our dogs should be able to say "no" to other dogs as long as they are appropriate about it. 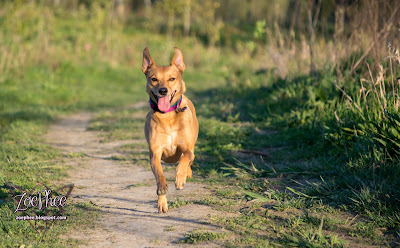 I think as a society we've decided that any time a dog snarls and snaps that it's "aggression" and then that dog is immediately labeled as a bad dog. We need to immediately "correct this 'aggression'" and dogs are not allowed to show any signs of being anything other than our happy-go-lucky companions.

The reality is that dogs have only so many ways they can communicate that they are unhappy. Their subtle body language cues often go ignored (by people and other dogs) so then they have to escalate to get the message across. People think that dogs are being aggressive when the reality is that they are just displaying agonistic behaviors, social behaviors, that are completely normal. These dogs only want to achieve one thing "give me space". That is not aggression. How else are they supposed to communicate to another dog who isn't listening to back off and that they don't like what that dog is doing?

True aggression is defined as "intent to cause harm" and "inflicting damage on another individual". In all the time that I've had Phoenix (going on 4 years) and in the context of greeting other people's dogs, she's never injured a single one by being snarky. She's never drawn blood and she's never left a single mark on another dog. That is not us getting lucky. If a dog truly wants to do damage or hurt someone, they can and will. Most of the time, dogs know exactly how strong their jaws are and they know exactly where they are placing their mouths. If a dog air snaps and misses you, they meant to miss you. If a dog bites you and gets you, they meant to bite you. By being snarky (and seriously inhibited snarky, at that), all Phoenix wants to achieve is telling the other dog that she needs space or that the way they are interacting with her is inappropriate. (IE: Male dog trying to hump her). Phoenix displays behaviors related to avoidance, behaviors that only mean she wants distance. 9 times out of 10 when we go to the off leash park, she will choose to get away from another dog versus greetings and interactions. Phoenix is not an aggressive dog and she does not have any intention to cause harm or inflict damage. She just wants her personal space bubble respected. We can't blame her for that.

In the past there have been three injuries to other dogs in relation to play, two of them were caused by Zoe and only one might have been caused by Phoenix. Zoe used to get very over-aroused during play and she would play too rough. She caused scratches to two separate dogs, both belonging to friends. Phoenix may have nipped a dog during a game of chase but every dog was chasing the dog that was running and nobody saw which dog nipped her. Unfortunately, these sorts of things can literally happen to anyone who goes to the dog park. Play injuries are more common than anything else. Dogs get banged up playing with each other. It's a thing.


So what does all of this mean? Am I going to stop training my dog? The short answer is no way! I'm still going to do everything I can to make sure that Phoenix has good interactions with other dogs. Just this past week we went on a nice long walk with my co-worker and her dogs. The dog that a few months ago, Phoenix snapped at. At the beginning of the walk, Phoenix partially displayed her teeth exactly one time. She didn't snark or snap, just lifted her lip and only slighly. By the end of the walk, they were all walking side by side. I'm hoping we can do these sorts of walks on a regular basis because my co-worker's dogs are so calm and they are perfect helper dogs. The more positive interactions Phoenix can have where she doesn't have to display agonistic behaviors the better.

Basically, I am just removing the labels I've put on my dog. I'm not going to stop training. We live in a society where there's a dog and a person around almost every corner. Being prepared and having training to deal with those situations is extremely important.

When I first got Phoenix, I decided and committed to dealing with her and training her as if she was a normal dog. Somewhere along the way, I lost that when I decided to label her as reactive. We could literally label every single dog that has ever lived as reactive. Every dog has at one point or another displayed behavior we could call "reactive". I really want to be done with labels as much as possible. Labels don't describe behaviors. Labels don't train behaviors, either. I've even stopped speculating with people on what breeds my dogs are. I'm just over it.

I've realized that I've become fearful of other dogs and other dog owners because of people marching their "rude" overly enthusiastic "must greet everyone" dogs into her face and her reactions to that. Social pressure made me decide that she wasn't normal and I was scared of what other dog owners would say or think about her. I was scared of confrontation with other dog owners. I've come to realize that my dog is normal and that it's not her fault our society thinks all dogs need to be friendly with each other, that all dogs must greet every single dog they meet. 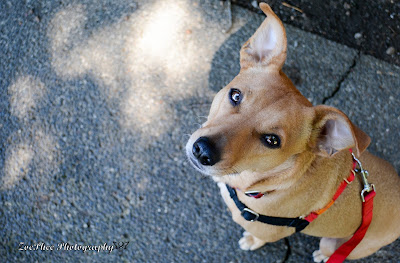 So what can you do to help other dog owners? My best advice is to give other dogs and owners as much space as possible. Assume all dogs you come across are unfriendly until proven otherwise or the other owner gives you their permission to approach with your dog. Avoid on-leash greetings with other dogs if you can. Leashes make dogs feel trapped and they are more likely to be uncomfortable and display behaviors that mean "give me space". Teach your dog to be neutral to other dogs and to ignore other dogs as they are passing. If you see someone working with their dog alone in a field when there's a dog park 5 minutes down the road, assume that their dog does not want to be friends with your dog. Leave them alone and don't unleash your dog on them or trudge through there. Lastly, never force your dog on other dogs and people. They definitely do not need to meet every single dog or person they see and it's best to start training them for that as soon as you can.

My journey with Phoenix is far from over and we still have a lot of training to do but I really need to celebrate all her successes and how far we've come. She's an awesome little dog, she loves to train and play with me. She's the best snuggler a person could ask for and really she's just a regular dog. She's so fun and happy, she loves belly rubs and a warm blanket just like any other dog. I'm really glad that I have her in my life.

Disclaimer: I do work for a dog training facility but none of my posts are endorsed by the owners. All opinions and experiences are my own.